Last month's Margin in Voice & Data seminar held at the Forest of Arden hotel on June 22nd signalled clearly the need for a new strategic approach to emerging market opportunities and threats, most preferably along the lines proposed by speakers at the event.

The big industry issues like cloud and digital transformation are now familiar and well understood, but the challenge of moving away from familiar surroundings is ever present in the fast spinning world of technology. The market has also spawned a new competition battleground, the customer experience, but this is a clash that must be won on unfamiliar ground, long before a prospect even engages with a potential supplier for the first time.

It's a fact that a buyer's journey may be 70 per cent complete before speaking to a provider, therefore marketing needs to be focused on self-directed discovery, according to ShoreTel's EMEA Marketing Director Gary Gould. In a keynote presentation to delegates he said: "Content is key. The channel must use material like case studies as referenceable proof points in an online environment where peer-to-peer reviews are seen to be most trustworthy."

This shift in buying behaviour is happening at the same time as a jolt in the mid-market where sweated assets are becoming ripe for replacement. In this space, believes Gould, the market for UCaaS is growing and represents the biggest opportunity for resellers with a cloud offering that embraces a 'flight to quality'. "We spend more time on creating a quality user experience," he added. "Mobility is important here, along with video, social collaboration in the workplace, open app integrations and the shift to being interconnected with everything. In this market there are strong margins in consultancy and professional services. Resellers who are able to provide relevant marketing material to buyers at the research phase of their journey are in a far stronger position to win in the mid-market competition battleground."

Paul Taylor, Sales Director at Voiceflex, urged delegates to lift the veil on what lies behind the cloud and offered pointers on what to look for in a cloud partner, price being the least important factor to consider. Top priorities on his scorecard are core values, a channel-only modality, financial stability, security, connectivity, cloud and network features and apps such as call recording, fraud prevention and analysis including IP profiling - and then price.

A stick in the mud mindset is wholly out of place in such a forum as Margin in Voice & Data from where the rise of new opportunities was to begin, including WebRTC, which is high on Taylor's agenda. He insisted that a future proof strategy must include a WebRTC journey, which Voiceflex has already embarked on and monetised for the channel. He revealed that the company's SIP trunks will be WebRTC enabled later in the year but showed the audience via a live demo the immediate benefits of features such as click-to-call via a website. "We're doing the future now," he told delegates in a keynote presentation.

Voiceflex's WebRTC capabilities are based on a link-up with Genband that enables it to leverage all of Genband's expertise and package the app commercially on a monthly rental basis. "WebRTC will open doors and close deals," added Taylor.

IoT and M2M have also been high on the agenda of industry talking points for some time, but beyond our industry there is little understanding of the technology, according to keynote speaker Anton Le Saux, Head of IoT at Zest4, who cited figures that indicate 87 per cent of people are in the dark about IoT. Before joining Zest4 last summer from O2, Le Saux witnessed the operator's IoT revenues double over three years on what had taken 25 years to build. When you consider the prevailing lack of IoT awareness in the market, such figures put a magnifying glass on the scale of this unlocked opportunity, spotlighted by today's surge in M2M connections which can be driven by a quite subtle demand from niche markets.

The language of M2M deployed by Le Saux in his keynote address to delegates was one of end-to-end managed connectivity and managed data, and he offered the audience a key to unlock market potential for such services. "Sell managed data and simple end-to-end solutions to get into the customer, and follow up afterwards with more bespoke solutions," he said, citing vehicle telematics as a solid starting point.

Solutions such as in-cab cameras record all of the time but only transmit data when prompted, triggered by incidents that are recognised by the system as worthy of further inspection. Insights like these are a boon to those, such as fleet managers and insurance companies, who stand to benefit from information about driver behaviour and habits, or require submissible evidence to prove liability or otherwise. "Margin in IoT is a reality," added Le Saux. "Bespoke opportunities are uncovered by asking the right questions. Use simple M2M solutions as the Trojan Horse."

There is no point having new technology areas like the IoT if they are not widely adopted. The channel's role in this will be pivotal. But unless resellers are blipping bright on the radar screens of ICT buyers they, along with the impressive solutions discussed above, will go unnoticed. What matters in the long-term is how reseller business models are to interact with the industry and end user surroundings. One way is to stand out, says Vanilla IP's Sales Director Iain Sinnott who extolled the benefits of being different, not so much by deeds but through the medium of perception.

According to his equation, being different equals profit. He shot down in flames strategies such as follow the leader, plodding behind the herd and going head to head with rivals. Instead, he advocated an alternative based on owning your own particular difference, invoking stand out figures Eddie Izzard and Lady Gaga as examples of personality projections that make them different. "Create your own unique proposition based on what works for you," urged Sinnott. "Difference can defend margin in negotiations. You'll be thought of first if you are seen as different."

Using 'difference' as a mechanism to shout loudest also applies to those business owners looking to exit, pointed out Knight Corporate Finance Director Adam Zoldan in his keynote address to delegates. He explained to the audience how building up a favourable perception of what a business is worth - based on its people, products, performance and profit - can translate into value. In a discussion on the sale of Modern Communications between Zoldan and its former owner Adrian Barnard on stage, Barnard said: "Your company is what it's worth, but you can create a premium by developing a good perception of your business."• 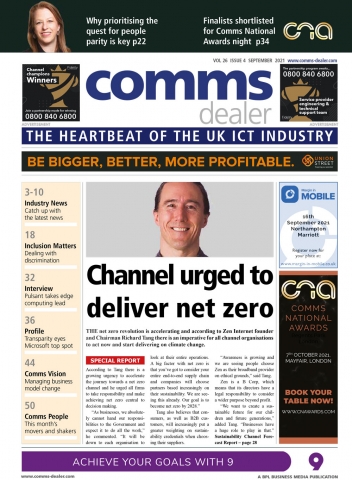